Thursday afternoon, March 18, 2010
The single biggest question I had before we left for South Africa had to do with safety. Would concerns about crime limit our ability to move around freely; to enjoy beng here? Now that we’re about to leave I can answer: that hasn’t been a problem.

I know the least about Johannesburg, as we had so little time there, and all of it came right after our arrival. The stories about crime are worst there (and indeed the morning we left, one of the employees at our B&B didn’t show up for work because a close friend of hers had been robbed and stabbed (not fatally)). Likewise, we had so little time in Durban, I can’t really judge it.

But from that point on, it’s been fine. Out on the Wild Coast and on the Dolphin Trail, I felt safer than I do at home (where I wouldn’t think of leaving my doors unlocked at night). And when we arrived in Cape Town last Saturday, we asked Hannes (the co-owner of our B&B) where we could safely walk in Cape Town. Anywhere in Green Point (their neighborhood) at any hour day or night, was his answer. Anywhere in the rest of central Cape Town during the day, he continued, though we might want to be a bit more cautious after dark.

Hannes, a collector of fine china and antique silver who looked to be in his late 50s, seemed a prudent fellow. His romantic partner, David, once worked in the perfume industry. The rooms of the B&B are all named after famous perfumes. It seemed unlikely he would steer his guests into the jaws of death. So for two nights in a row, we dined at the Waterfront, and on the 25-minute walk home we shared the dark streets with so many other pedestrians, I felt very comfortable.
Yesterday we got even more ambitious on foot. We’d moved out to the suburbs by then (staying in the home of a very generous house-trading contact), so we drove our car to the Bo-Kaap district in the center of town, parked it, and set out on what turned out to

We also visited two museums, both excellent. One focused on the gold treasures of West Africa and the other presented the infamous history of Cape Town’s District 6 (whose name probably inspired the title of the recent sci-fi movie). This was once a seedy but vibrant enclave near the heart of the old city filled with immigrants. Unusually multiracial, it must have been a lot like New York’s Lower East Side early in the 20th Century: grubby and raucous and zesty. But in the early 60s, the South African government re-classified it as a White district and began ordering the vast majority of the residents to move out. Hundreds of thousands of people had their property confiscated; their homes bulldozed. Most were relocated to a grim, sand-blasted and barren plain a half-hour from their former homes. The museum beautifully captures how traumatic this was for most of those affected.

We also strolled through the beautiful Company Gardens park, and we picked our way through a couple of open-air craft markets (where I was intrigued to note that almost none of the vendors harangued us to patronize them — de riguer for Egyptian street hawkers — nor did anyone seem inclined to bargain.) When we paused once to study our map, a passerby asked if we needed help. At another point, when we really were disoriented and asked a security guard for directions, he led us for several blocks to get us pointed toward where we needed to go.

These were clean, busy streets, filled with commerce. The vast majority of the people moving through them (90%? 95%?) were black. It was a pleasure to share the cityscape with them, at ease.

This morning we throttled back even further. Anticipating the grueling flight to come (at 9 p.m. tonight we start what will amount to almost 24 hours of straight air travel), we’d saved a visit to the Kirstenbosch Gardens for last. This is a World Heritage Site, and deservedly so. Located on an enormous spread of land not far from where we’re staying, it’s one of the great gardens of the world, celebrating the incredibly diverse plant life of this region. I learned that that diversity puts San Diego’s to shame (with so 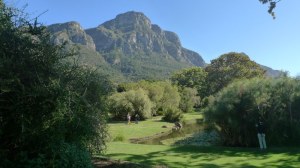 mething like 94 species per 1000 square kilometers here, versus 14 in Australia, and a puny 12 in California!) We walked through arboreal tunnels formed by gigantic trees: camphors, yellowwood, podocarpus, emerging onto huge lawns edged by African heathers and protea and grasses. At least, the weather was perfect: mid-70s, no trace of the demonic wind that’s tormented us every other day. I lay down on the grass at one point, listening to the birdsong, thinking about how much more pleasurable it was than sitting in a coach seat on an airplane, savoring one of those moments when it really WAS about the destination, rather than the journey.

But now it’s time to head for the airport, to journey again.