Throughout the seven weeks we traveled in India, I thought more than once about the parable of the blind men and the elephant. It recounts what happened when a group of blind men investigated the strange new creature they had heard about. Each man touched a different part of the beast, and each formed a clear idea of what it must look like. The guy who felt the trunk said the elephant was like a snake. The one who touched its side said that was nonsense; elephants instead resembled walls. The man who stroked its ear concluded they’re like fans, and so on. Each was so convinced the others were wrong they eventually came to blows.

Before we left San Diego, I knew India was big and complicated. But our hands-on experiences were humbling. I blogged about our hellish midnight arrival in Kolkata where the line for prepaid taxis moved so slowly it took us more than an hour to reach the head of it. I could have (blindly) concluded we should never take another Indian prepaid taxi. But we did — at least a half-dozen times over the weeks that followed, including another time in Kolkata. On all those subsequent occasions, the service was fast and safe and cheap.

After a month of traveling in India, I wrote about how we had not once found anything resembling a modern grocery store. But then we went south, and in Kerala we found plenty of them.

Our final destination, the state of Kerala hugs the far southwestern coast of the subcontinent. Traveling to Kerala from Kodagu (the relatively isolated mountain district where we had our elephantine adventures) wasn’t simple. Interminable buses make the trip, but no trains. In order to fly, we would have had to drive east for at least four hours back to Bangalore and then fly west again. Finally, the simplest solution was to hire a car and driver. The ride would cost $157 and take about 10 hours, we were warned. Frankly, I didn’t believe it. How could it take 10 hours to go less than 220 miles?

We learned. Potholed two-lane roads in the mountains made the going slow at first. The flow would improve for a stretch, and our hopes would rise. Maybe the worst was over? But as we approached the coastal road south, we moved even more slowly. Traffic wasn’t as bad as what we saw in so much of the north, but the streets were narrow, and the constant flow of buses, taxis, tuk-tuks, bicyclists, animals, and pedestrians through them forced our driver to jam on the brakes almost constantly or at best creep along. I hunkered down in a back seat, trying to lose myself in blogging, but the twisty roads drove Steve up to the front seat. There all he could do was observe hour upon hour of our slog forward. In the end, it didn’t take 10 hours to reach Cochin. It took almost 11.

We stumbled out of the taxi, cranky and fed up with India. It felt irredeemable — until the next morning, when Peter Panathara took us on his “silent tour” of the local backwaters. Much of the coast of Kerala is broken up into a complex network of waterways. One of the big tourist activities here is to cruise them. Some folks rent houseboats and spend one or more nights sleeping on them, but day trips also are popular. I only read about Peter’s tour a few days before we headed for Cochin. He had an opening, a stroke of immense good luck for us, because he turned out to be one of the best guides imaginable.

In the 7 hours we spent together, we learned that before starting his tour business, Peter had worked for more than 20 years as an investigative reporter for one of Cochin’s daily newspapers, primarily covering crime and corruption. His knowledge of the region felt encyclopedic; his pride in Kerala palpable. The state towers over the rest of India in countless way, including average lifespan (at least 10 years longer); literacy and access to modern plumbing (100%), population growth (declining, rather than continuing to skyrocket), religious tolerance, and environmental consciousness. Cochin’s spiffy new airport is powered by a huge field of solar panels, the first we saw anywhere on the subcontinent. The state has already largely recovered from the devastating monsoon flooding and landslides that struck in August, the worst in a century, with a valor and vigor that would make a great action film.

Once we reached our embarkation point (about an hour outside the city), the experience grew even more magical.

One bad thing about Kerala is its heat and humidity, but in Peter’s big canoe, propelled by a local villager armed with a long pole, a light breeze cooled us. Crossing a broad channel, we sheltered under a big umbrella…

…then slipped under a low gate…

…into a series of narrow canals shaded by coconut palms, mahogany, and other huge tropical trees.

For a long time, Peter stopped talking, and we glided through the passages hearing only the birdsong and the swish of the water moving over the hull.

We stopped a few times, first to gather coconuts from one of the trees… 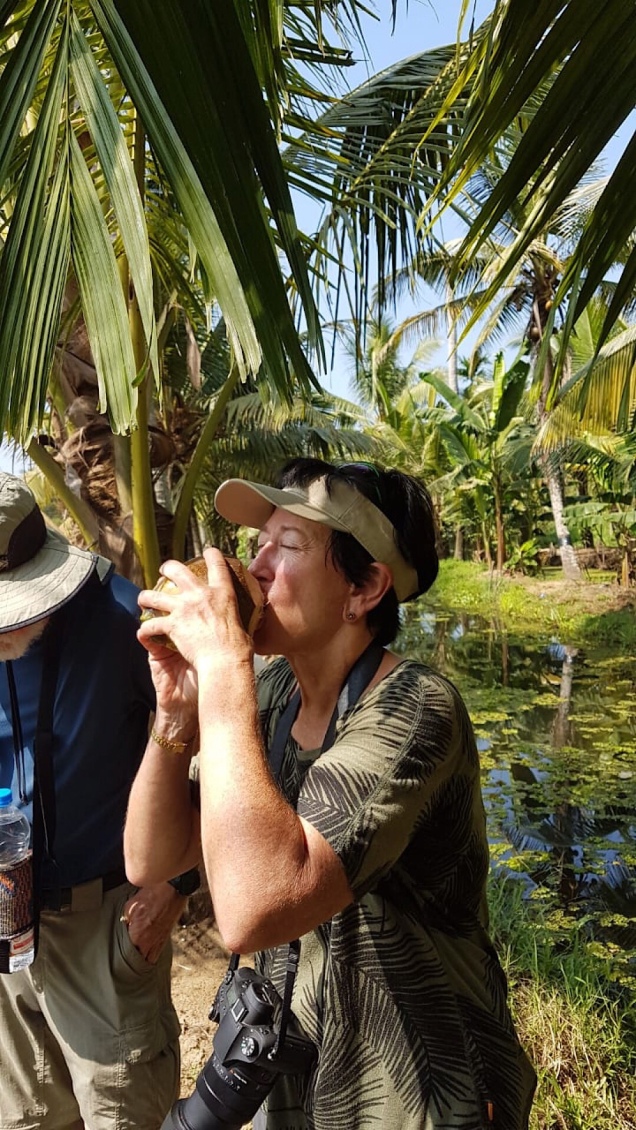 and taste their custardy insides.

We continued on to a tiny island and met the man who first settled it and now lives there with his relatives and a few other families. 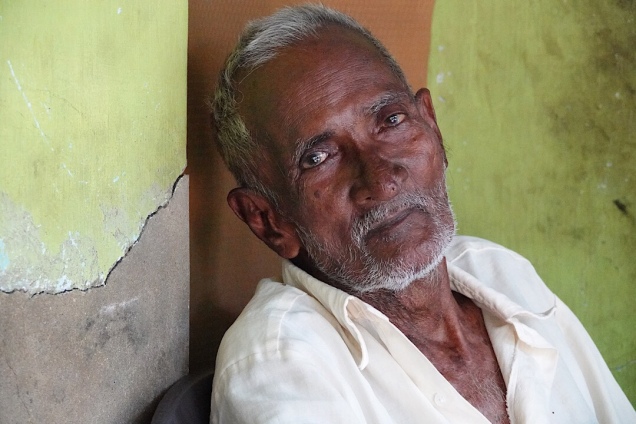 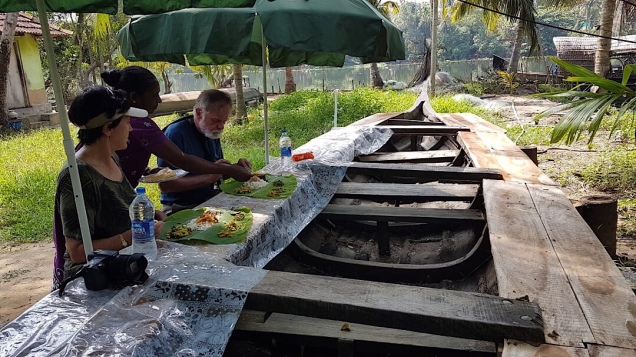 …and learned how to spin twine out of coconut fiber.

That’s Peter. By the time we got back to our hotel, he felt like an old friend.

For me, it was probably the best single day of the whole 7 weeks. The next day, our last in India, couldn’t top it, but we still had a pleasant time strolling past the fishermen working just a few blocks from our hotel 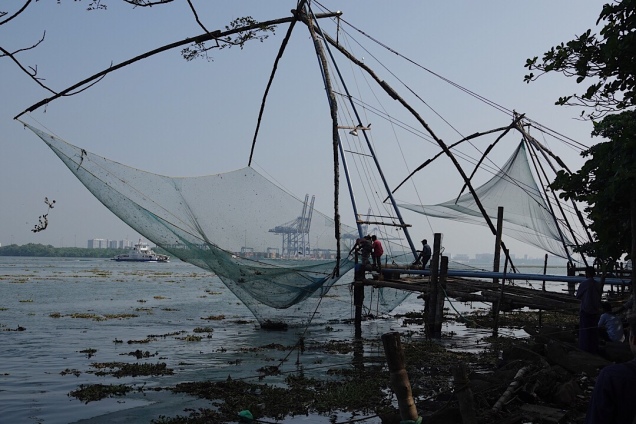 The heart of old Cochin is 500 years old, and you can sense that.

That night, we had the strangest theatrical experience of our lives. One of Kerala’s traditional art forms is kathakali, in which actors and musicians present dramatizations of passages from the great Hindu holy books. In their classical form, these performances can last from 6 to 10 hours. However, visitors sample a vastly shortened form. It starts with watching the actors apply their makeup.

Here’s what the stage looked like when we walked in.

The make-up application had just begun.

It continued over the course of the next hour.

Then we listened to a short lecture about the performance elements. Actors don’t speak but rather communicate meaning with highly stylized hand signs, facial expressions (like this one. I think it was revulsion)…

and eye movements. Kathalkali actors must train their eyeballs like athletes. I’ve never seen such amazing control over that body organ.

After the lecture, we watched a 30-minute excerpt.

When we emerged onto the street, Steve said, “We’ll, I’m certainly glad I came with you. If you told me about it, I would have thought you took some really heavy drugs.” We agreed it made kabuki theater seem as banal as a network sitcom. I cannot explain it any further than that, except to suggest it felt like we had touched yet another very weird part of the elephant.