On our second night in Varanasi, the holiest city in India, Steve and I found ourselves seated in a balcony overlooking a scene that felt like a movie spectacle — something Stephen Spielberg might dream up when he was feeling manic. 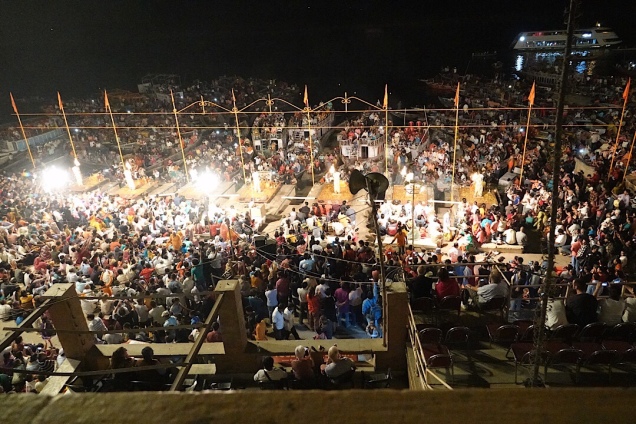 My photo doesn’t do it justice. It doesn’t clearly show all the small boats congregated in front of the seven platforms or the priest standing on each platform, and of course you can’t hear the continuous bells and the plaintive singing. Every night in Varanasi after sunset, before a vast assembly, the priests go through a complex ritual: blowing into conch shells, wafting incense dispensers, waving great silver candelabras. It’s part religious ceremony; part performance art. 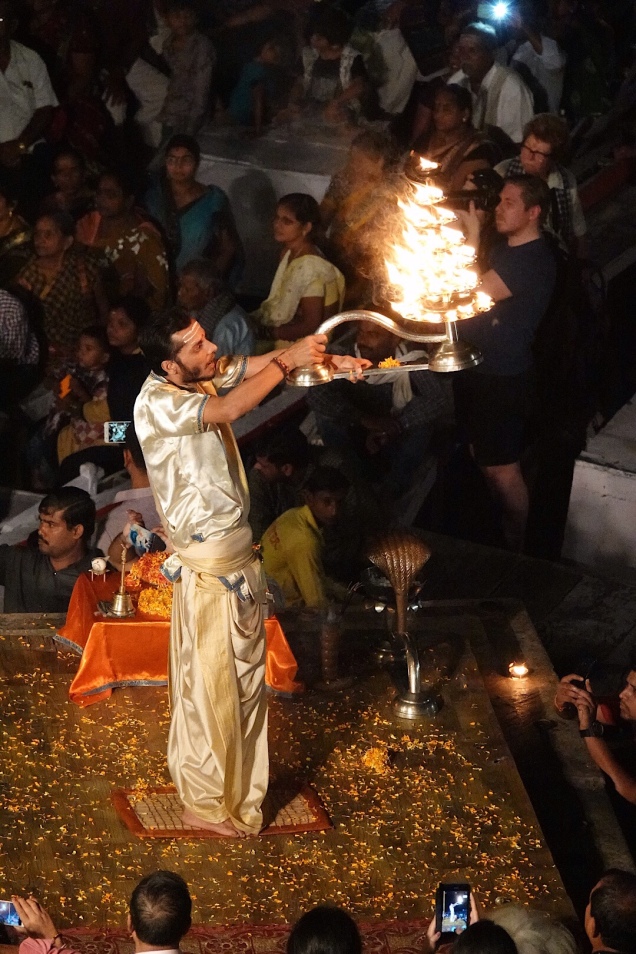 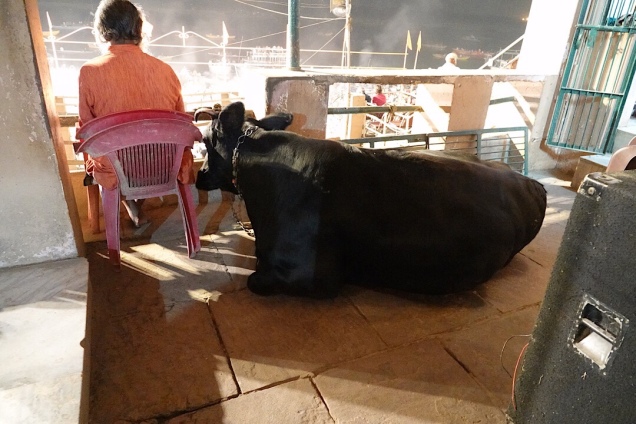 On a balcony below us, a huge brown cow watched the activity. Cows roam everywhere in Varanasi, in narrow alleyways and major thoroughfares; they wander through the cremation ghats, munching on the flowers brought to honor the dead. We saw countless monkeys too, scampering along power lines, scaling building facades, hanging out in the byways. We were warned not to stare at them or approach the babies, lest the mothers charge and bite us. During our four days in Varanasi, we saw no cobras, though we heard that locals sometimes defang them and allow them to roam the old city. Pilgrims like them, reportedly, because the Hindu god Shiva has the hood of a cobra.

Pilgrims from all over India come to Varanasi to bathe in the Ganges (which Indians call the Ganga). It’s the mother river, most sacred; people believe if you take a dip in it, you can short-circuit countless reincarnation cycles and go directly to heaven. The city is thought to be one of the oldest continuously inhabited places on Earth, and in the heart of it, great stone embankments with steps built into them line the riverfront. 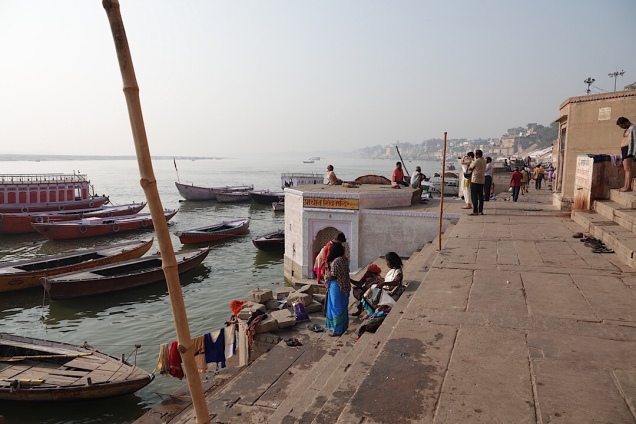 Strolling along these “ghats,” as they’re called, is endlessly entertaining. I’ve never felt more like I was on another planet. You see… 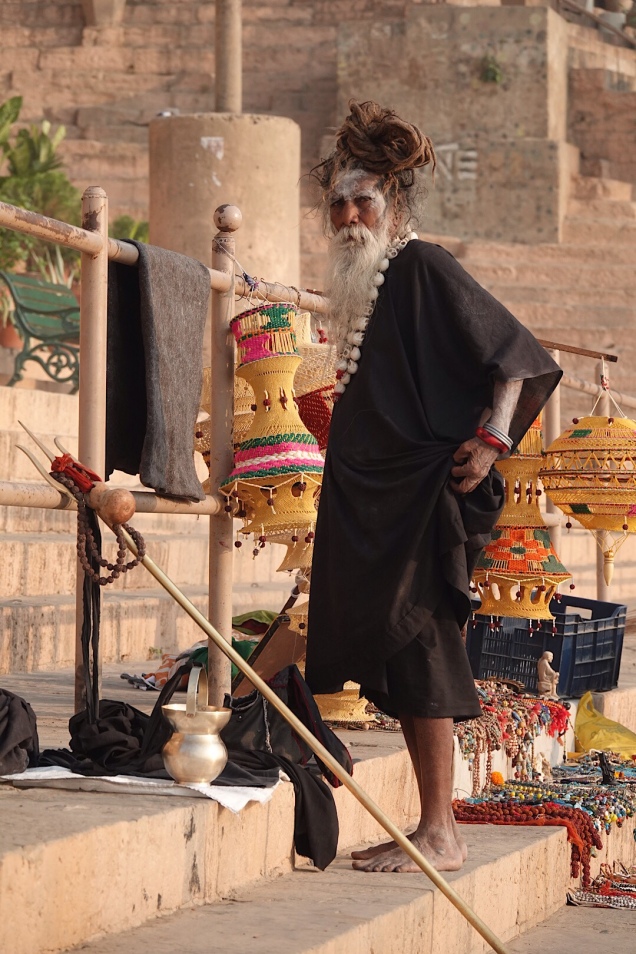 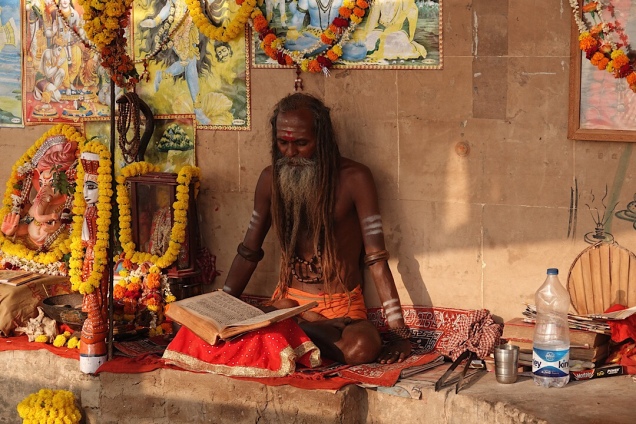 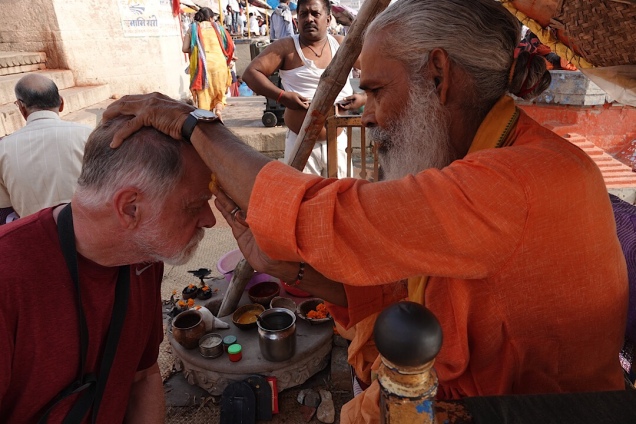 …some of whom will bless you. There are… 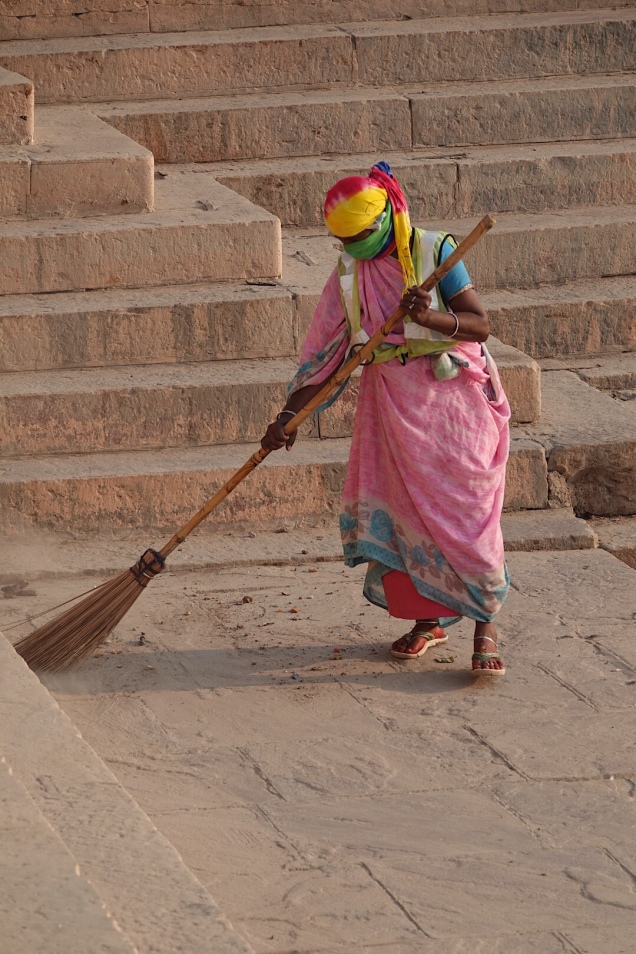 …ladies in saris tidying up… 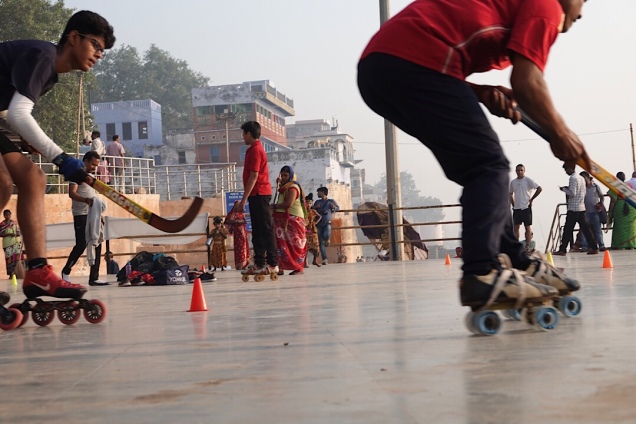 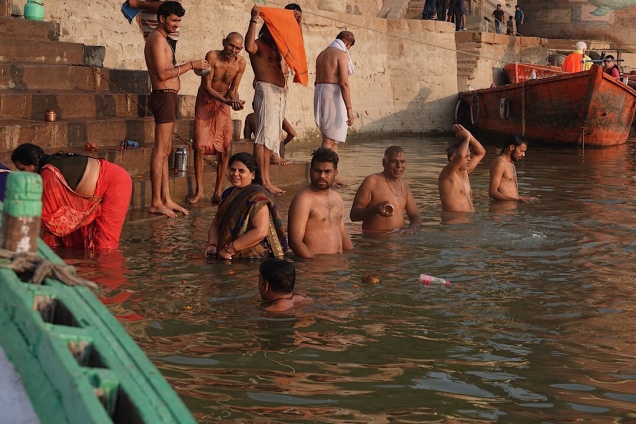 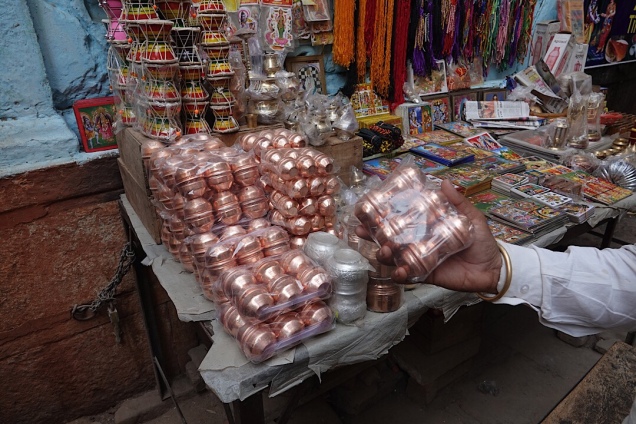 ..and shopping. These are sealed bottles of Ganga water, ready to take home for your friends. (To our friends, sorry. We resisted.)

One morning we watched the sun rise. 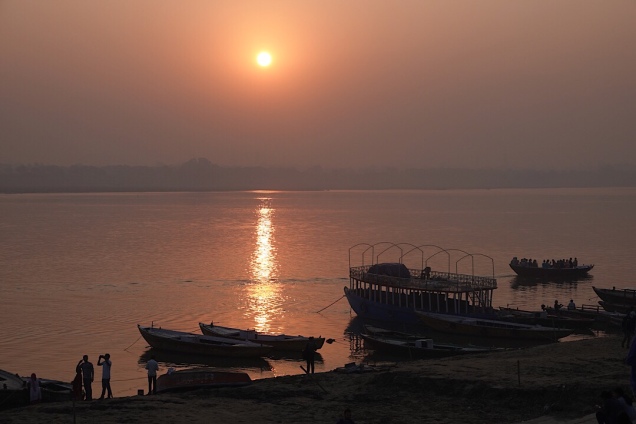 That’s not a typo. It was sunrise, not sunset. Varanasi’s air appears no cleaner than Kolkata’s.

That same evening we were rowed to one of the two ghats where believers are cremated around the clock (another purification method ensuring instant access to paradise). 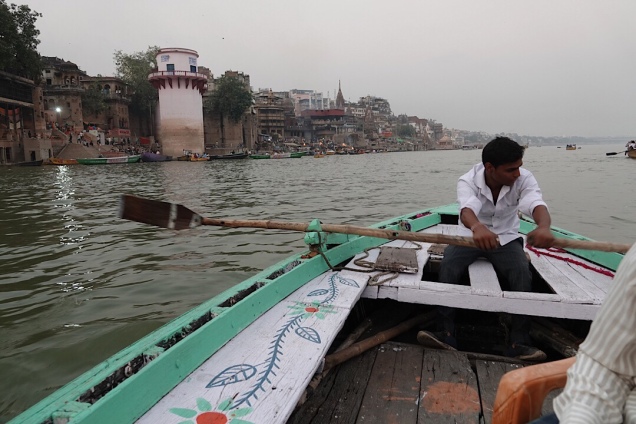 To our surprise, we smelled no ugly odors. 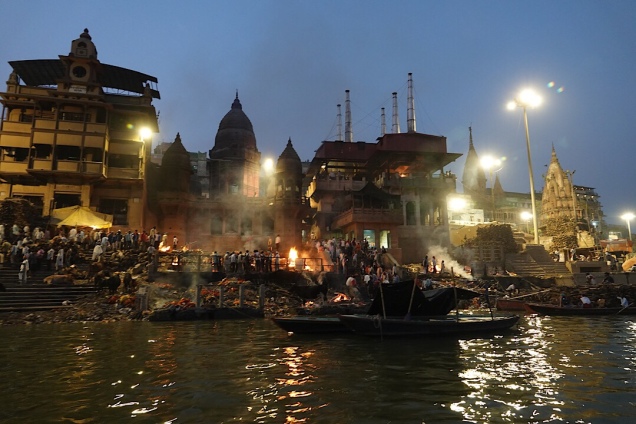 This is because the fires burn deodorizing banyan tree wood mixed with sandalwood, we were told.

Later Steve and I strolled on foot to the same cremation ghat, where around the back we saw the wood stacked up… 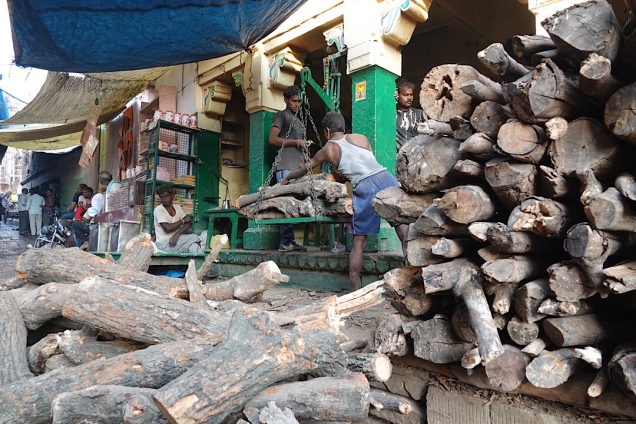 …and carefully weighed for each funeral pyre.

Over the years, I’ve asked many folks who traveled in India what they thought of it. In Malaysia, for example, we met a middle-aged American musician who had just spent two months studying classical music on the subcontinent. He replied, “India is full of many beautiful things. But most of them are invisible.”

I thought of that in Varanasi, where we spent two nights staying in a former palace located next to the most important ghat. Opened as a hotel just two years ago, it doesn’t look like much on the outside, but the inside is a haven of beauty and peace and serenity. Every night musicians played in the central courtyard while a dancer performed classical steps before them. Every morning a flutist sitting on a velvet cushion on an upper floor blew sweet, wistful melodies. The restaurant served the best Indian food we’ve ever tasted. 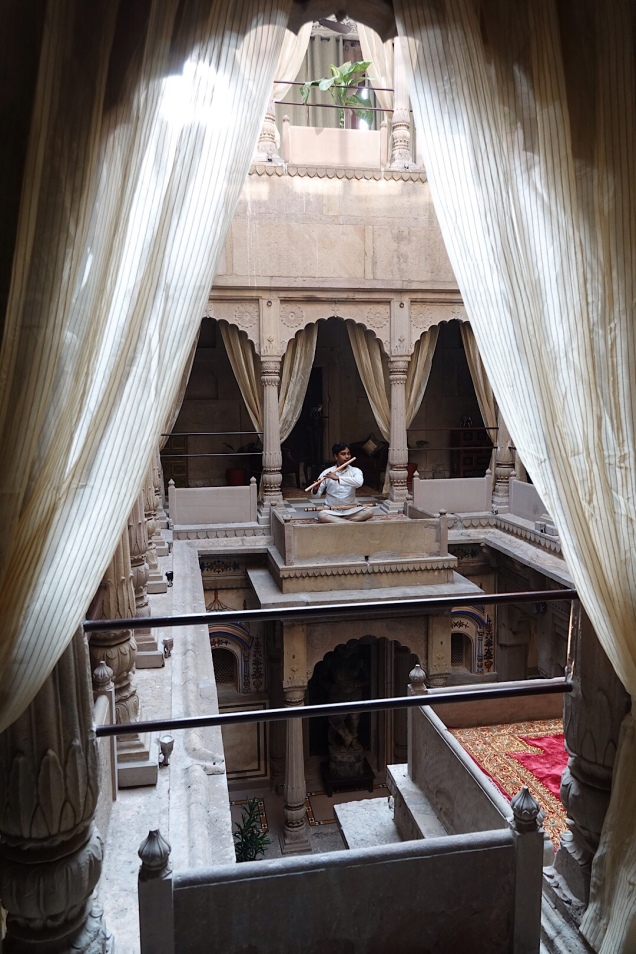 The other two nights we spent in a guesthouse that cost $14 a night. Compared to the palace, it was spartan. The rooms were spotless, but tiny. And the 31-year-old owner/operator was smart and knowledgeable and generous-hearted. When he unintentionally dropped and lost one of the paper clips we kept in our passports to mark the page with the Indian visa (which every hotel must photocopy!), we told him it was no big deal. But two days later he presented us with a replacement that he went out and bought for us. After we checked out to move to the palace, he invited us to return for his special spiced tea (masala chai). In the conversation we had while sipping it, he felt like a treasured old friend. 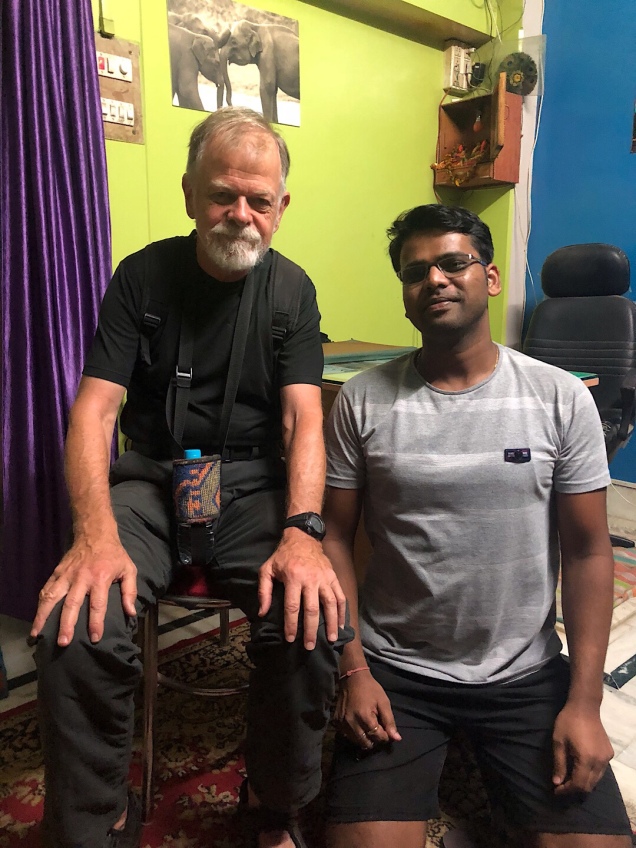 Steve and I sensed a peacefulness on the ghats of Varanasi, and Sonu said he feels it too. As hard as he works and as crazy as the guesthouse operation can get, he told us he tries to spend an hour or so by the river every day. It re-energizes him. I think there’s also beauty there which you can’t miss seeing. 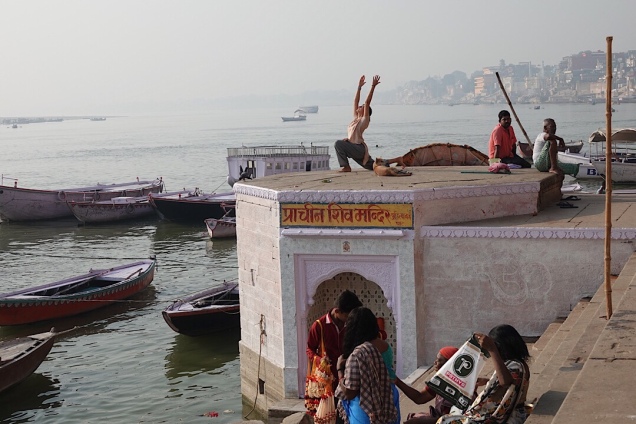