The US/Mexico border has spawned a lot of anguished stories over the past few years, so I’m happy to report that something jolly took place at the very southwestern-most point of the continental United States the other day. Several hundred Americans and Mexicans gathered on the beach where the border meets the Pacific, and we practiced singing a song (the Beatles’s “A Little Help From My Friends”) together. The end result wasn’t the most polished choral effort in history. But surely it must rank among the most offbeat.

Back in early September, Steve and I had learned that ArtPower, the UCSD performing arts series, was sponsoring this special event featuring Choir! Choir! Choir! — a Toronto-based singing group run by two musicians who take the non-traditional approach of including anyone who wants to participate (usually for an admission fee, though the UCSD event was free). They often tour, teaching each audience an arrangement of a well-loved song. This time, however, they would be adding a twist: doing it with folks situated on both sides of the angsty international line.

We signed up immediately and heard the US crowd would be limited to 500; got word some registrants were put on a waiting list. A few weeks later, we learned of a change in plans: state park officials were suddenly demanding that ArtPower submit the names of all registrants in advance. They would not be able to drive into the park on their own but rather would need to be shuttled in from an outside location.

More directives trickled in: we would have to meet at Southwest High School, be checked in, and allow ourselves to be wristbanded. We could bring in no weapons; plastic replicas of weapons; knives of any size; explosives; fireworks; umbrellas; poles or sticks; laser lights or pointers; coolers; containers of any type (except for water bottles); aerosols; mace or pepper spray; camera tripods; sharp objects such as scissors or knitting needles; Leatherman or similar tools; bullhorns or similar “voice-enhancement devices;” noisemakers such as air horns, whistles, or drums; banners, signs, or placards; animals; or backpacks larger then 12x12x20.

Undeterred, Steve, our visiting friend Megan, and I headed for the high school around 1 pm Sunday (October 13).

We checked in, sizing up our fellow singers, a range of ages but mostly white folks who all looked like NPR listeners. Before long, our bus set off southward, and it didn’t take long to reach the park. We disembarked, trying to scope out what the heck we would be doing. In January of 2018, Steve and I attended another cross-border performance. That one was a percussion concert that we watched from the Tijuana side. For it, some of the US musicians were allowed inside “Friendship Park,” that no-man’s-land created inside the double American fencing built in the late 90s and early 2000s. Nowadays it’s only opened for special occasions.

But the inner park was locked. 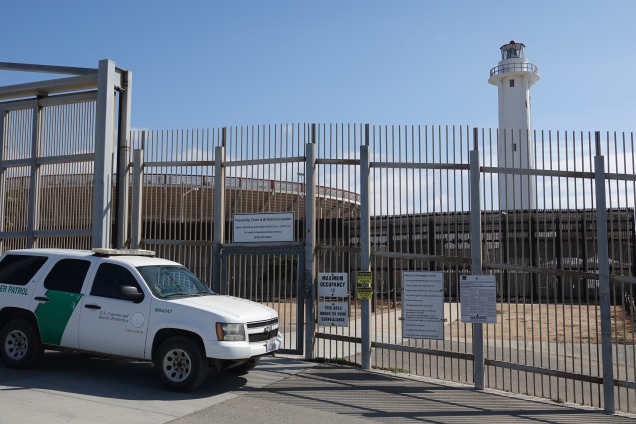 Instead we were directed onto the beach, where we could see a small stage and a sound truck.

Stern signs, police tape, and an intimidating roll of coiled razor wire prohibited us from approaching the barrier there.

Beyond it, a sea of beach umbrellas and people were barely visible. I’m pretty sure there was beer on that side. And tacos. Probably music too.

We, on the other hand, were herded into a metal enclosure, where we waited for the program to begin. 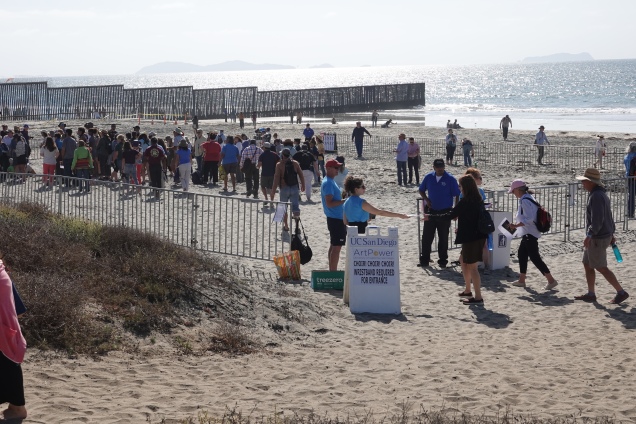 Up above  us, armed guards, some with dogs, looked down, stony-faced.

“This is kind of interesting,” commented the guy standing next to me. “I’ve been to the beach before. But never in a cage.”

If the setting on our side of the border had some grim elements, the activity, once it got started, included lots of laughs. Daveed Goldman, the Choir! Choir! Choir! director leading the American contingent, is quite a comedian (as well as a competent guitar-player). His cohort who was working the Mexican side, Nobu Adilman, seemed a bit stricter a task master. Both guys wore microphones, so we could hear everything said by each. The Mexican wannabe choraleers yelled and applauded when they were introduced, and of course we responded in turn. (There seemed to be a lot more of them.) We waved our sheets of lyrics at each other in the distance, and that made the fence and the distance between us feel a bit less dreary.

The actual song practice was more serious than I expected. We gringos sang the first lines —What would you think if I sang out of tune? — and the Mexicans sang back in Spanish: Levantarte y marcharte, quizás? (Would you stand up and walk out on me?). We practiced certain sections again and again. At first, the Mexicans’ voices sounded faint and distant, but over the course of the next hour we all grew louder and more confident. By the final run-throughs, I think everyone was singing more or less together. There were nice harmonic flourishes. The final cheers were robust.

From time to time throughout the experience Daveed chastised American participants for holding up their cell phones and recording what was going on. “We are recording all of this for Youtube — and we will do a better job!” he bellowed. “You should be living in the moment.” I’m not sure when the official Choir! Choir! Choir! video will be posted to the group’s Youtube site. When it is, I’ll add a link here. In the meantime, here’s a link to some video shot on the Mexican side of the border. I expect the final Choir! Choir! Choir! product will look more polished than it felt when we were singing it. But I bet it won’t feel as depressing and uplifting and fun as it did in person there.