On this trip, I have learned it’s more fun to watch baby bonobos play than it is to watch many movies. The action is almost nonstop. They sock each other; pounce. One chases another, catches up, and smashes into him. They tickle each other and make a noise that sounds like panting, but it’s not; it’s the sound of bonobo laughter. Sometimes they go too far and someone gets hurt. Ear-piercing shrieks erupt. Others may beat up the bully in retaliation. The smallest ones never stray far from their surrogate mothers. Older ones sometimes mimic copulation. They’re far too young to actually have sex. It’s just instinctive, practice with the tool they will use soon use daily to diffuse social tensions. 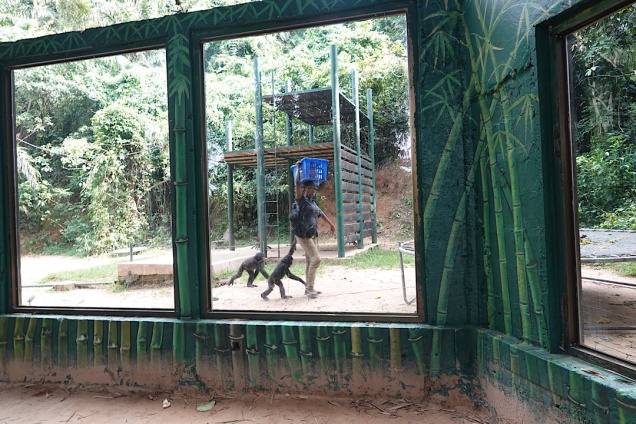 I don’t think there’s anywhere else on earth where you can watch a whole pack of young bonobos play, by themselves. Seven little ones were living in Lola’s nursery during Steve’s and my stay. They ranged in age from two to five, and they all had shiny black fur and boundless energy. Most (if not all) had arrived malnourished, ill, and so traumatized they were close to death.

Over the years, Claudine and her team have developed a detailed protocol for caring for the tiny victims, many of whom have seen poachers shoot their mother before their eyes, then hack her into pieces to be sold as meat. After a thorough medical screening and treatment for any critical health problems, the orphan must be quarantined for six weeks to ensure it’s not carrying any disease that could decimate Lola’s entire bonobo population. But you can’t confine a young bonobo to a cage, all alone. It would die from the absence of love and physical contact. Instead at Lola, each newly arrived youngster is assigned a human surrogate mother who rocks and cuddles it, feeding and caring for the little one in a way that’s looks even more challenging than caring for a human toddler.

I can’t imagine what the surrogate moms go through during this quarantine period. Claudine says usually it takes about two weeks before the newcomer begins to accept and trust the human female. The mom has to try everything she can think of to get the orphan to eat. The poacher/trafficker may have fed it beer or tainted water or scraps of offal or handfuls of rice. The Lola staff says Coke is often the thing that will entice a baby into taking its first sips before transitioning to a more nutritious formula. During a quarantine, the mom returns to her own home at night, but then she got back to work each day without any break until the baby at last can be integrated into the larger group.

Being a surrogate mom to one or more bonobos may get easier after that, but it’s still hard work. The youngsters cling to the women. They climb (or pounce) on their backs and arms. They tug at their pant legs. It’s intensely physical and also essential to the youngsters’ survival.

Day visitors to the sanctuary must view the youngsters through this glass. As resident visitors, Steve and I got to go a bit closer. But to lessen the chances of the youngsters catching some germ, only the surrogate mothers get to hold them.

Steve and I visited the nursery several times. We went early one morning to observe the morning ritual: a daily bath.

Twice we also returned late in the afternoon to watch the bedtime preparations. (The residents sleep in hammocks in a couple of large cages.) 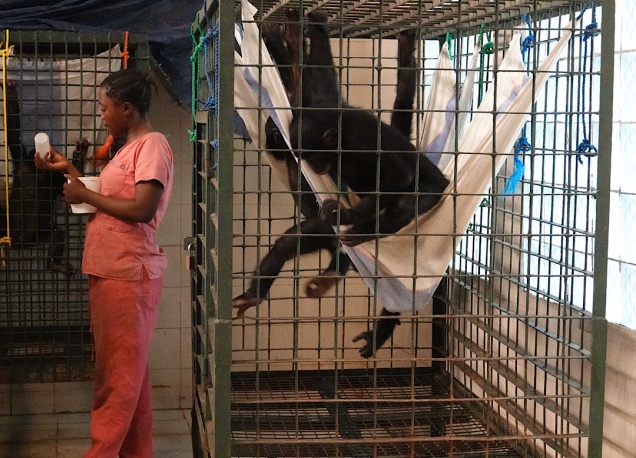 We heard all their names, but we only memorized one: Balangala, that of a 5-year-old male, the most confident member of the gang. One morning we watched him climb a large bamboo stalk that was growing into the enclosure. His weight bent it over, and he jumped from it onto a trampoline. After a while he lured most of the younger ones up onto it with him. Eventually the stalk broke, and the moms had to call for a staff member to cut and haul it away. 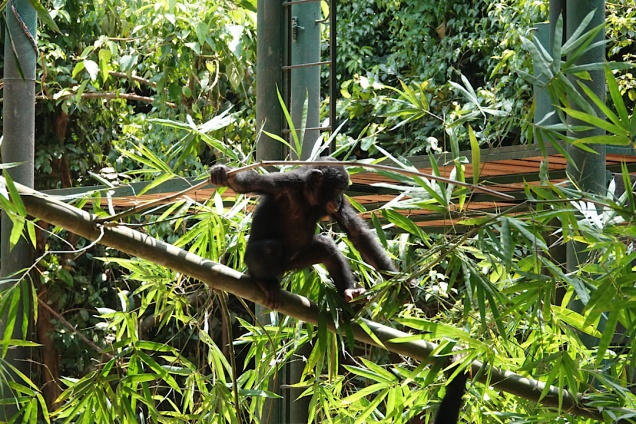 Balangala came right up to the fence where we were observing. He threw dust at us, demanding our attention. He reached through the the bars to grab Steve’s ear. He bullied the little guys. 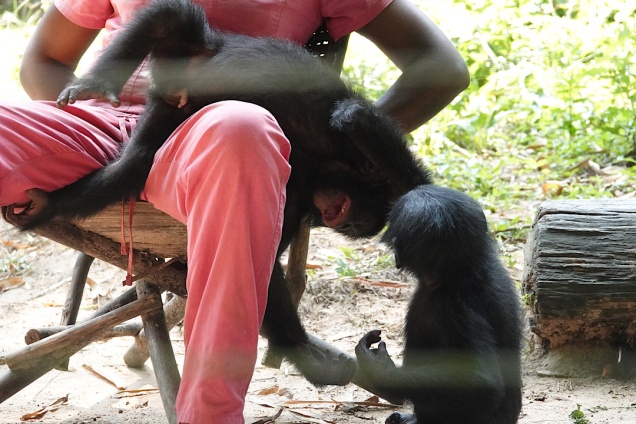 At the end of the day, he swung through the tunnel that leads to the nursery’s night enclosure, then stopped when he reached the place where we were standing. Penis erect, he thrust his hand through the grating: the classic bonobo handshake (the title of Vanessa Woods’ entrancing book).

Staff members say Balangala is probably ready to join one of the troupes outside the nursery. But he’ll do better if he can go with another youngster, and none of the others was quite ready yet. Bonobo societies are complicated. Before we arrived at Lola, Steve and I already knew that. But our time observing the older primates underscored that.